The domestic dervish who authored this letter remains unknown.

Just a word Nela dear to tell you what I forgot to say yesterday—that Mrs. Pomeroy has been in town for a week, and is here for her health. So I fear she did not yet get your letter, and also that Grace and Fanny are going next week to Baltimore for a visit, so their house will be closed and any steps toward getting that drawing table must be taken without delay. I am sorry to trouble your mind with my matters, indeed your face full of care haunted me all night—but I can do nothing about the Bates property which others are holding.

And I wish of course to have the rooms as attractive as possible when parties look at them. A letter from Minnie W. to Julie—who is in town for a week—says she must give up her home for a while. I fear she intends renting it, and though hers is as large as mine, with only four bedrooms, it is a formidable rival with its pretty portieres and furniture. She has “lost seven letters since Xmas,” two of them contained checks! John W. is “investigating it.” So her letters to Julie are to be accounted for in that way. Julie is going to see her and has just gone to see “Mad Young Fulton” with the fee for the deposit as her last interview was unsatisfactory being “out of hours”—with the other parties waiting, therefore hurried. She received a letter from Mrs. Boyd this AM, offering her the Junior Department, with an assistant, at $400,” the decided wish of the Bishop and Hersey—“begging her not to disappoint them.” It is pleasant to have such an ultimatum if all else fails, and she need not decide now. But she prefers New York if it is possible to get something here. Don’t speak of these things until she or someone else tells you. You know she does not like to have her plans discovered and disseminated even in the family.

Margie & Mable are here for the day. A letter from Cloë says it was more blue paper for the finish of the dining room that she wished to have sent with the package. Fortunately three rolls more were sent up with the bedroom paper, arriving yesterday, and doubtless, the entire lower floor will be finished by Anderson this week. Tonight she says the pictures were never so effective on the parlor wall as now, also that she gets all the woods she wants from Burns, who says she is welcome to all she wants! Mrs. Kelly says he does not pay anything for it! Certainly, they are the best neighbors I ever had. But they overwhelm me. Cloë goes up to the Stirlings for her dinner! Thus taking that walk six times each day! You will be sorry to hear that Pitt’s engagement is broken off! Clo thinks “Pitkin was a plateful.” I hope Charles is much better and at business.

I fear Grace will leave before then. Chas P can communicate with Fanny. The Woosters live at 23 East 39th—I will gladly pay your fares if you can leave home. Will it be possible for you to see Mrs. Pomeroy tomorrow? 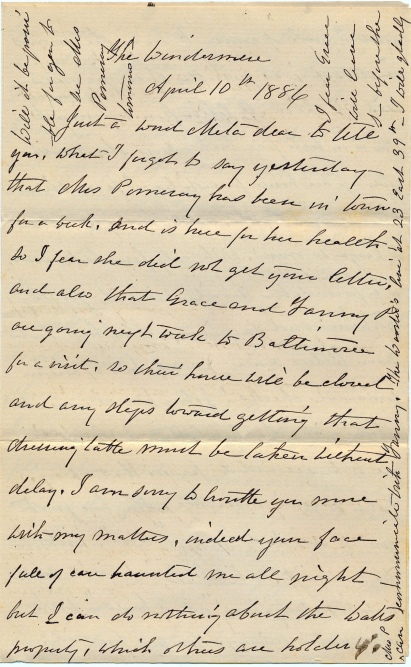 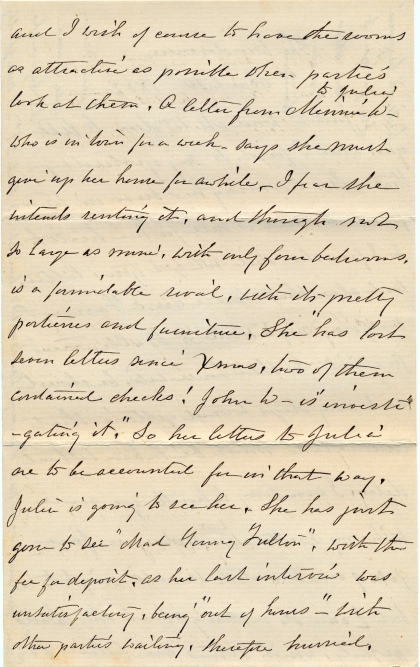 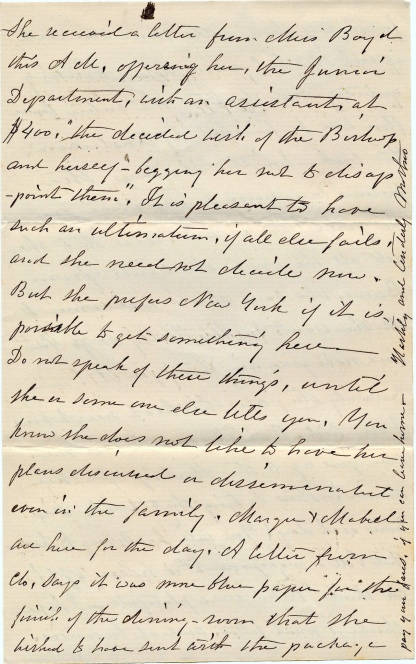 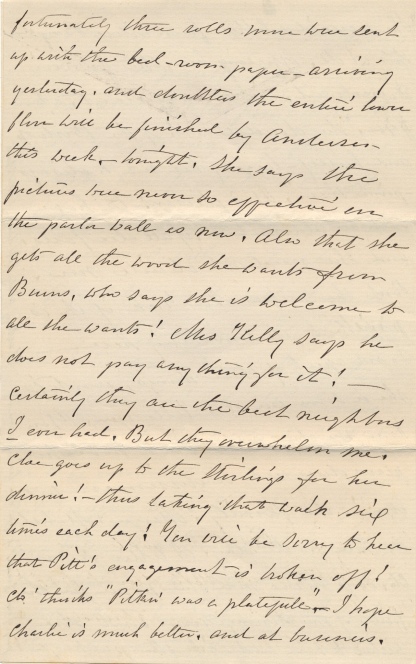 This chatty, domestic, and rather frenetic letter was written in 1886 by a woman I at first believed to be Priscilla Jones Eddy Crane, born 21 January, 1809, in Hoosick Falls, Rensselaer County, New York, to Jonathan Eddy (1774-1840) and Rebecca Rouse (1779-1846). Priscilla was the widow of lawyer and judge, the Honorable John Crane (1791-1860) of Pomfret, Chautauqua County, New York. The town is located on the picturesque shores of Lake Erie and is the ideal spot to own and rent out a summer home, as the writer appears to have done. (I vacation regularly in the Chautauqua area and recommend it heartily.)

According to The Genealogy of the Crane Family, Vol. I, “John Crane was a graduate of Yale College, class of 1812; a lawyer by profession, having studied law at Whitestown, N. Y., with Judge Gould. In 1817, he went to Fredonia and there began the practice of his profession. He at one time having as an associate in his law practice the Hon. Daniel G. Guernsey, and subsequently the Hon. James Mullett, the partnership with the latter continuing until Crane’s appointment as County Judge, about the year 1822. He was an active and influential citizen, having for several years previous to the above appointment, held the office of Justice of the Peace and Supreme Court Commissioner, as well as being an efficient member of the Presbyterian Church at Fredonia. He was the first Secretary of the Board of Trustees of the Fredonia Academy. The first institution of the kind incorporated in Chautauqua County. This office he held about 35 years and until compelled on account of the infirmities of age to resign. He died at Fredonia, much lamented, May 18, 1860.” The cause of death was “paralysis” caused by stroke.

The only hint of sadness in the text is the sender’s comment, “I am sorry to trouble your mind with my matters, indeed your face full of care haunted me all night.”

Charles and Cornelia spent the first years of their marriage living with John and Priscilla Crane in Pomfret. They appear there on the 1855 Census, with Charles working as a clerk. The couple went on to spend their lives living in Randolph quite close to Charles’s younger brother Theodore, a dry goods merchant, and his wife Mary and children. The brothers may have begun in business together, as the 1865 census records Charles as a merchant.

On the 1875 census of Chautauqua, Charles’s occupation was banker, although, by 1880, he clarified his job as a cashier in a bank; his son Douglass worked as a clerk in a store—probably his brother’s. By 1900, Charles was recorded as a “retired merchant.” He made his last appearance on the 1910 census  in the year after his wife’s death, aged 84, occupation, “none.” Both Charles and Cornelia are buried in Randolph Cemetery, Randolph, New York.

Although the letter does not mention a family death, it was sent in a black-bordered mourning envelope. The only hint of sadness in the text is the sender’s comment, “I am sorry to trouble your mind with my matters, indeed your face full of care haunted me all night.” This darkness passed quickly, however, and the writer returned to the domestic doings and gossip of her circle.

So who was the woman who signed “Warmly and tenderly, Mother”? Cornelia Adams mother, Priscilla Eddy Crane, died 28 December, 1878—eight years before the letter was written. Neither could it have been penned by her mother-in-law, China Phelps Adams—she passed away 10 April, 1881. Cornelia’s father died before her mother, so this letter was not written by a step-mother and both of Cordelia’s grandmothers were also long dead. Did Cordelia have a godmother who took an active role in her life? This seems the only option left to consider.

The address from which this letter was written—400-06 West 57th Street, Manhattan—was  The Windermere—an early apartment building that marketed flats to “The New Woman” of the 1880s who were single, working, living alone. According to a 2013 article in the Wall Street Journal, “The luxury class had yet to come to the West Side in the early 1880s, but the Windermere mimicked a rich lifestyle for its middle-class residents with its harmonious ornamented facade wrapping the corner. The 39 apartments boasted between seven and nine rooms, and the latest technology of the times: hydraulic elevators and telephone…. By the late 1890s, working women comprised nearly 80% of its 200 residents.” After decades of neglect, it was listed as a city landmark in 2005.

The St. Nicholas, at which Cordelia Adams stayed when the letter was written, was an apartment house at 334 West 124th Street, New York City. In 1912, it was an investment property of the Railroad and Warehouse Commission of the State of Minnesota. The building no longer exists. Ω

One thought on “Mother Who?”