There is good evidence that the marriage was kept a secret for some time.

I live not far from Frederick, Maryland, which is a wonderful little city—a real Maryland gem that is more vital now than at any time in its venerable history. Frederick’s old bones have been lovingly preserved beside modern additions such as a river walk, an antiques row, and a theatre district. In fact, Patrick Street, which this postcard depicts, looks much the same today as it did when this was mailed on 11 August, 1909—just less eerie and weird.

Addressed to Mrs. H. Roschen, 838 Edmundson Avenue, Baltimore, Maryland, and mailed from the summer resort community of Braddock Heights, which was only a reasonable trolly ride away, the message reads: “Dear Mamma, I wrote Uncle Henry & Uncle Ernst & grandma a postal. Please send my double heart pin with my other things. It’s in my jewelry box. I am going to see Miss Hartman of the W.H.S. now. Almost finished my hardanger. Nice & cool here. Everyone well save for a toothache. Love to all from Hermine.”

Hermine Joanna Roschen, who wrote this postcard when she was 19, was born in November 1889. No one yet knew it, but she had been married for the better part of a year.

Her father, Henry Roschen, was from Germany, having come to the United States in 1875. An extant passport application states that he was born in Bremen 23 February, 1858, to Hermann Diedrich Roschen and Adelheid Brockwehl, and became a naturalized U.S. citizen in 1887. On this application, he is described as 5’4″, with brown eyes, a straight nose, a medium mouth, a short chin, dark hair, dark complexion, and a round face.

The 1890 Baltimore City Directory listed 838 Edmondson Avenue as the location of Edward A. Prior and Company, fancy goods and toys wholesaler, and Henry Roschen as its proprietor, so perhaps the family home was above the shop of this establishment. The 2 January, 1897 Baltimore Sun contained a notice from Louis Sinsheimer stating that he had sold his wholesale flour business to Henry Roschen and Frank Boehmer, who would operate it under the name of Boehmer & Roschen. This partnership lasted until January 1907 when Henry Roschen likely died. If not then, Roschen was certainly deceased by the enumeration of the 1910 Census.

“The girls were enticing in all that shimmering cloth, bright tinsel and dainty touches of rouge.”

The Baltimore Sun of 11 February, 1908, offered a glimpse of Hermine at Baltimore’s Lyric Theatre during a masked ball by the Germania Mænnerchor, a German male choral society. “The girls were entrancing, in all that shimmering cloth, bright tinsel and dainty touches of rouge,” salivated the Sun. The men, however, fell short in the newspaper’s eyes, being “as ludicrous and misshapen as they could possibly be while temporarily hiding their masculine grace in masks, flat shoes, and lurid colors.”

The Germania Mænnerchor ball included a tableau, a ballet of small girls, and general revelry. Prizes were given, one of which Hermine, her sister Louisa, and several other young ladies won for a performance titled “School Days.” Later that year, Hermine would experience the last of her own school days when she graduated from Baltimore’s Western High school.

On 26 January, 1909, Hermine married Irvin Henry Hahn, son of Joseph Henry Ferdinand and Clara M. Hahn. I can ascertain nothing of where or how they met, but there is good evidence that the marriage was kept a secret for some time. For example, the 9 March, 1909 issue of the Sun noted that Miss Hermine Roschen—not Mrs. Irvin Hahn—had been at the Lyric again to hear the Metropolitan Opera Company with the world-renown operatic tenor Enrico Caruso. We already know from her postcard that in August 1909 Hermine was summering in Braddock Heights under her maiden name, and when the 1910 census was taken, Hermine and her siblings lived with Hermine J. Shroeder, their 71-year-old  maternal grandmother, who had emigrated from Germany in 1862 with her husband Henry Schroeder, an artist born in Prussia in about 1839.

Whatever caused the delay in announcing their marriage, it was in the open by 5 June, 1917, when Irvin Hahn filled out a World War I draft registration stating that he was born 8 May, 1887, in Baltimore, and was living with his wife and child at 1957 Edmonton Avenue—just down the road from the houses of Hermine’s mother and grandmother. Hahn noted that he worked for his father, a manufacturer of metal goods for the military who led a company that was established in 1898. Irvin was noted to be of medium height and slender, with blue eyes and brown hair.

In 1920, the Hahns lived in White Street, Baltimore, with their two-year-old son Irvin Henry Ferdinand, born 6 May, 1917, who went by his third name or the nickname “Ferdie.” Their situation was unchanged a decade later, save that the family moved to 708 Reisterstown Road, Pikesville, a Baltimore suburb. Hahn listed his occupation as a manufacturer of metal goods. Finally, the 1940 Census placed all three family members together at the same address.

In 1942, Hahn registered for the WWII draft. Hahn was now the owner of his own business—the Irvin H. Hahn Company of 326 S. Hanover Street, Baltimore, which had been set up in direct rivalry with his father’s. (Incredibly, the company still exists today as a manufacturer of police badges and other insignias.) Hahn was described as 5’8″ with a light complexion, brown hair and brown eyes, and had a scar on his left thumb.

Ferdinand attended Reisterstown’s Franklin High School. This couplet was written about him in the 1933 yearbook: “Fun-loving, quick-tempered, white-haired Ferdie, his classmates’ joy and his teachers’ worry.” (Who else sees Draco Malfoy?) In the school’s 1946 yearbook, Hermine and Irvin were listed as boosters. This is the last trace I have found of her. She died 5 November, 1949.

After Hermine’s death, her husband took a solo journey to what was the Canal Zone, now Panama, in 1951. Two years later, he sailed from the port of New York to spend 3 months in Angola, presumably visiting his brother-in-law Ernest who lived in Loanda with his wife Augusta Fredericka Cranford.

Irvin died in October 1966. His obituary in the Sun reads: “Irvin H. Hahn is Dead at 79. Opened Metal Trimmings Company in 1928. Services for Irvin H. Hahn, retired president of a firm which produces badges and other metal trimming for uniforms, will be held at 11 a.m., Friday, at the Frank H. Newell funeral establishment, Reisterstown Road and Waldron Avenue, Pikesville.

“Mr. Hahn, 79, died Monday night at his home, 708 Reisterstown Road, Pikesville. Hahn was the president of the Irvin H. Hahn Company from 1928 to 1954…. A native of Baltimore, Mr. Hahn attended public schools here and the University of Maryland…. He opened his own firm in 1928…. His company had headquarters at 207 South Sharp Street until 1942, when the building collapsed in a snowstorm. The organization then moved to S. Hanover street. Mr. Hahn relinquished the presidency of his firm, which has 23 employees, to his son I. H. Ferdinand Hahn, in 1954, but remained as an advisor to the enterprise. He also held the posts of vice president and secretary.

“He was a member of the Masons, the Shriners, the Ames Methodist Church, and the 100 Club of Boumi Temple. Survivors include his son; a brother, Edgar F. Hahn, of Catonsville; and two sisters, Miss C. Viola Hahn and Miss Mildred E. Hahn, both of Baltimore.”

Irvin and Hermine’s son Ferdinand never married and had no children. He died in April 1987. I have not been able to ascertain where Ferdinand or his parents are buried. The intrepid Ernest Roschen died in Orange County, California, 2 August 1992, equally childless. Ω 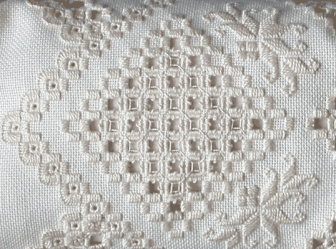 As a postscript, let’s return to the postcard’s message, in which Hermine Roschen mentioned a “Hardanger” that was nearly finished. This was a piece of Hardanger embroidery, or “Hardangersøm,” using white thread on white even-weave cloth, sometimes also known as “whitework” embroidery.
Photo by Velvet-Glove at English Wikipedia.