She was christened Anna Martha Bell, but she was always known as “Mattie.” The baby girl was born 9 July, 1857, in Erie, Miami County, Indiana to a father with the unusual name Pleasant Lilly Bell (1809-1882). According to his 20 July, 1879, obituary, “Mr. Bell was born in [Vevay,] Switzerland County [Indiana] in 1814, two years before the admission of Indiana to the sisterhood of states. He came to this part of the state [Miami County] when yet a young man and worked on the Wabash & Erie Canal which the state was then constructing. He was a resident of Miami for more than 40 years. His reputation was spotless and he was in high esteem by all who knew him.”

Pleasant was the son of Armiger Lilly Bell (1771-1816) and his wife Sarah Blackford (1779-1848). Armiger Bell was born in Fluvanna, Virginia, 10 January, 1771. He was the third youngest of a dozen children. The Bell family was large, well off, and owned land and slaves. Armiger later sailed down the Ohio River to Kentucky, meeting his future wife Sarah, and married her on 31 March, 1795. The couple settled near Vevey and took up farming in what was then a heavily forested area.

After Armiger’s death on 5 November, 1816, his eldest son James took over the farm, until his mother remarried in 1821 and his new stepfather took over from her son. Her second husband, John White, appears to have been abusive and volatile. Ultimately, he mysteriously vanished while taking a herd of hogs to market. Sarah eventually came to live with her son Pleasant and his family. She died in 1848 and is buried in the Tillett Cemetery.

The 1870 census of Peru Township, Indiana, provides a snapshot of the Bell family just before the loss of Laurinda Duffield Bell, who was enumerated incorrectly as “Lucinda.” Pleasant was then a farmer with real estate valued at $10,000 and personal goods valued at $600. Seven children were still living at home, including Mattie, who was listed as Martha, age 13.

Laurinda was loved and looked up to in her community. Her obituary states that “Sister Bell was an affectionate wife, a kind and loving mother, and much respected by her neighbors,” who deeply mourned her after her death on 14 October, 1873, at 53 years of age.

My CDV likely pictures Mattie at age 16, dressed in mourning for her mother. It is also just possible that this image shows her at age 22, dressed in mourning for her father, who died 16 June, 1879. However, her fashions in this mourning photo seem to be more indicative of the earlier date. I have found a second picture of Mattie (below) that also dates from around this time. In both images, Mattie is nicely and fashionably dressed; she is lovely, albeit sad—perhaps more so in the earlier, non-mourning image. It may be that she knew her mother was dying, and that stress and dread is reflected on her face. 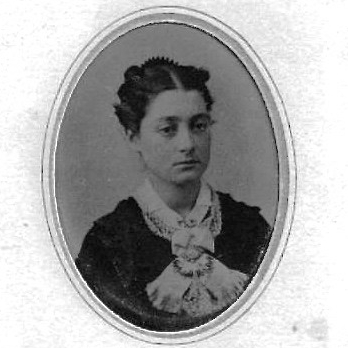 Mattie Bell married avid hunter James Rueben Tillett on 28 December, 1881. Tillett, the son of William and Elizabeth Grimes Tillet, had been born in November 1859 in Indiana, making him several years younger than his bride. The young couple had almost certainly known each other all their lives, having both been raised on farms in Peru Township. After establishing a farm in Pipe Creek, they went on to produce six children who included William (b. 1883); Hank (b. 1884); Grace (b. 1885); Ethel (b. 1886); Paul (b. 1891); and Elbert (b. 1894).

The couple made their last appearance on the 1930 Census. James was retired. They were both in their 70s. On 26 October, 1935, the Logansport Pharos-Tribune reported, “Mrs. Matha Bell Tillet, 78, … died of heart disease yesterday in her home near Nead. James survived his wife by two years, dying on 7 May, 1937, in Nead, Indiana. Both are buried together in Reyburn Cemetery, Peru Township.

The year after his death, the 18 February Pharos-Tribune noted that “a huge collection of hunting trophies owned by the late James R. Tillett of Nead … have been delivered to the [Peru] Museum…. included are elk, deer, and moose heads, a stuffed spotted deer calf, a stuffed white deer killed in Maine 25 years ago, numerous antlers, old-fashioned bear traps, and numerous other unusual relics.” Ω