Abigail Irena Hanks was born on 10 November, 1816, in Mansfield, Tolland County, Connecticut. She was the daughter of Rodney Hanks (1782–1846), a Mansfield, Connecticut, manufacturer of silk machinery, woolen goods, cannon swabs, and other machinery, and Olive Freeman (1783–1816). The extended Hanks clan were large-scale makers of silk, a business that had begun with the family importing English mulberry trees to Connecticut for the nurture of silkworms.

The Hanks family was also associated with the Meneely (Watervliet) foundry, which closed the mid-20th Century after more than a hundred years providing bells for various carillons and chimes throughout the Western hemisphere. The bell foundry was established 1826 in Gibbonsville, New York, on the west bank of the Hudson River, a few miles north of Albany, by Andrew Meneely, a former apprentice in the foundry of Benjamin Hanks (1755-1824), Abigail’s uncle, who is generally credited with being the first bronze cannon and church bell maker in the United States. Hanks is believed to have worked at a foundry connected with patriot Paul Revere and was a drummer during the Revolutionary War.

In the 1850 Census, the family was enumerated in Albany, New York, with Hitchcock stating his occupation was a finisher of bells and chimes. On the 1860 census of Jersey City, the Hitchcocks had a domestic servant and Alexander Hitchcock claimed a personal estate of $10,000. The family lived in a very proper row house at 121 Grand Street.

When Morgan’s father Charles died in September 1852, the estate consisted of $13,190.35 and a large tract of valuable farming land, claybanks, and timberlands, in all totaling more than 600 acres and worth about $100,000. According to Morgan V. Morgan et al. (Court of Chancery of New Jersey. Aug. 25,1891.), “James Rutus Morgan was about 19 years old when he took upon himself the duties of the executor. He spent most of his earlier years at school, from whence he was called by his father only a short time before his death. A few months, at the most, was all the time given to him to learn anything about the nature and extent of his father’s farming and clay business,” from which the entire support of his younger brothers and sister was to depend.

A Morgan, New Jersey, genealogy and history site notes, “For several years, James R. employed from 12 to 18 hands to assist in the management and working of the farm and clay-banks. The clay was transported chiefly to different localities in the state of New York. Morgan’s brothers and sister were educated at Freehold, Princeton or in Brooklyn. Lawrence O. Morgan’s headstone indicates he became an M.D. …. Morgan, his mother, and brothers and sister, occupied the homestead together until the mother was remarried in 1858. When they were not at school, Morgan and his brothers and sister [as well as his wife Julia and their children,] occupied the same homestead until it was destroyed by fire in 1865. During all of this period of time, all the provisions of the household were provided by James R. from the farm, or with the produce of the farm.”

James R. and Julia would have nine children in all—four boys and five girls. Family lore says that James R. was a Confederate sympathizer and possibly even a Confederate spy. Two facts support this: His Great-Uncle Charles Morgan owned a large plantation in Morganza, Louisiana, and in 1877, a son was born to James R. and Julia who was christened Robert E. Lee Morgan.

On 22 March, 1866, Madeline Hitchcock married University of Pennsylvania graduate James Fitz Randolph Mercein (1836-1904), who had served in the U.S. Customs Office during the Civil War. They set up their household in Jersey City and later New York City. After Madeleine, died on 5 December, 1893, her obituary read: “The death of Madeline Louise Mercein, wife of James R. Mercein, occurred suddenly Tuesday at her home on Madison Avenue, New York City. Mrs. Mercein was a daughter of the late Alexander Hitchcock, for many years master mechanic at the Watervliet arsenal, and during her girlhood was a leader in social circles in this vicinity, being a lady of unusual refinement. She is survived by a son and a daughter. The burial will be in the family plot at Albany Rural cemetery.”

Abigail lost her husband to “general disability” on 18 January, 1872. He died in Rahway, New Jersey, at the age of 60. After the Spring thaw, his body was removed from the temporary, above-ground receiving vault and interred in Menands, New York, Albany Rural Cemetery, on 15 May, 1872, in the plot of his father, James Hitchcock. In 1885, he was removed to another plot in the same cemetery by his daughter Julia. The above cabinet card of Abigail dressed in widow’s weeds dates to approximately that same year. In the image, Abigail wears a white widow’s cap and gutta-percha mourning jewelry that was fashionable, even for standard wear, in the 1870s.

In his Will, Hitchcock appointed his wife as executrix and bequeathed to Abigail “the use of all my household goods and furniture of every kind and description during her natural life and after her death to belong to and become the sole property of my daughter Olive H. Hitchcock.” He also gifted his wife “all the remainder and residue of my personal property.”

Abigail lived comfortably as a widow. When the 1880 Census was taken, Abigail was recorded at 227 Grand Street, the home of her son-in-law, George Phillips, and Olive, her daughter. Abigail died Christmas Day 1884, of pneumonia. Her body awaited burial until the Spring, as had her husband’s. She was laid to rest beside Alexander Hitchcock on 29 May, 1885, in Albany Rural Cemetery. Ω 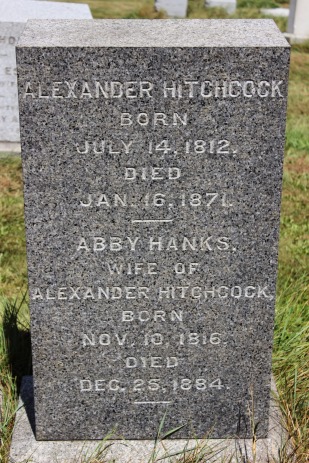 One thought on “Widow Hitchcock and Her Clan”