Recently, I was honored that Grant Kemp, of restoringyourpast.co.uk and a truly remarkable artist, chose two of my daguerreotypes to colorize. The results were utterly revitalizing, as can be seen from the comparison below. 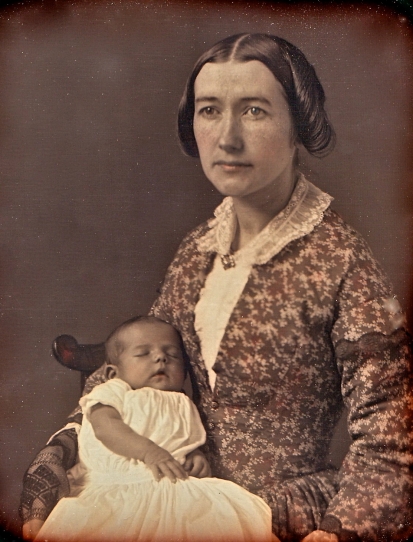 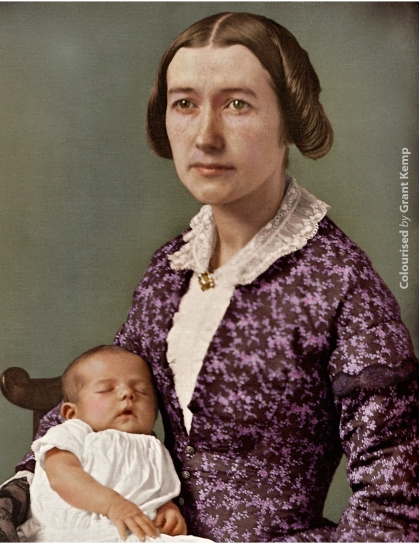 Grant says of himself, “Trained as a Graphic Designer, I have a Bachelor of Arts Honours Degree in Graphic Design. During my long graphics and print career, I have used design, image software and scanners from every leading supplier including the highest resolution drum scanners. I bring all of my industry experience to the Restoring Your Past service. Graphic design, image scanning, newspaper/magazine production, web, litho, and digital printing experience means I can offer a graphics service that’s based on having dealt with just about every sort of image destined for any type of output.”

Enjoy these samples of his work and if you have old family photographs to restore or colorize, a better digital artist than Kemp is unlikely to be found.

END_OF_DOCUMENT_TOKEN_TO_BE_REPLACED

A selection of vintage images from my collection featuring sitters whose identities, sadly, are unknown.

Julia was one of thousands of Americans who made for California after gold was discovered in 1848.

This wonderful 1/6th-plate daguerreotype shows a plump, well-dressed, melancholy woman. An inscription in the case identifies her as “Aunt Julia. mothers [sic] sister that went to Calif. in 1851 or 52.” Unfortunately, the niece or nephew who penned this message to posterity left out Julia’s last name. Lacking it, we will never know Julia’s story, save that this daguerreotype almost certainly marked her departure west, as her fashionable clothing and coiffure can be dated to about 1851.

After the Gold Rush kicked off in January 1848, many thousands hurried west to seek their fortune or to provide goods and services for those allured by gold’s siren song. This mass movement lifted the nonnative population from less than a thousand to 100,000. Filled by newcomers and new wealth, the California Territory was quickly admitted as the U.S. 31st state on 9 September, 1850.

The society that Julia joined was only somewhat more than nascent. One new arrival, Jessie Benton Fremont, who came by sea to San Francisco in 1849, noted her first impressions from the deck of the vessel, “A few low houses, and many tents, such as they were, covered the base of some of the wind-swept treeless hills, over which the June fog rolled its chilling mist.” (A Year of American Travel, published 1878.)

Fremont, the daughter of Missouri Senator Thomas Hart Benton and the wife of military officer and politician John C. Fremont, was used to the finer things. Her account of society in early San Francisco and Monterrey makes for enticing reading. I quote her here at length not necessarily as a member of the social class that Julia represented but as one of the few surviving women’s voices from the Gold Rush era.

END_OF_DOCUMENT_TOKEN_TO_BE_REPLACED

Europeana.eu offers up 2 million historical photographs that bring the old Europe and its people to life.

In this daguerreotype an unknown woman sits in a high-backed chair, dressed in a patterned dress with elbow-length sleeves and a wide slanted neckline. The white paper passe-partout is printed with a gold decorative pattern and the stamp “Daguerreotype by J. W. Bergström.” According to Nordiska Museet, Johan Wilhelm Bergström (1812-1881) was born in Kungsholmen to a carpenter’s wife and died quite wealthy, after a decade as a leading daguerreotypist and a career as an inventor.

According to the Victoria and Albert Museum, “This is one of the first daguerreotypes ever taken in the UK. Landscape view of London: Parliament Street from Trafalgar Square. In the foreground to the right is a statue of Charles I mounted on horseback, seen from the back, on a raised stone plinth or column with carved royal arms, surrounded by a palisade of railings and protected by stone bollards. Parliament Street goes to the left, lined with tall buildings of five or more storeys, most of which have awnings over the street. The skyline shows many chimneys and chimney-pots. The pavements have lamps at regular intervals. On the left side of the street is a line of vehicles and drivers. In the distance is the Royal Banqueting House. Note the man in a top hat sitting slumped against the lamp-post in the middle foreground, with four bollards around him.”

END_OF_DOCUMENT_TOKEN_TO_BE_REPLACED

“I bought this for 6d. at a Rummage Sale at Ealing Broadway Methodist Church. It was thrown out by Mrs J. W. Allcock.”—Thomas Inwood, 1939

The first photographic image of a human being was captured in 1839, when at about 8 a.m. one fine Spring day, photographic pioneer Louis-Jacques-Mandé Daguerre sat up his camera in the window of the Diorama in Boulevard du Temple, Paris, 3rd arrondissement, for an exposure that lasted up to 12 minutes. Although the street was crowded with both persons and horse-drawn traffic, none of them remained still long enough to register save for one man on a corner to whom a bootblack attended. We will never know who he was, but this 19th Century Frenchman holds a special place in mankind’s history.

In the 21st Century, we possess both still and moving images of our family and friends, but in the 1830s faces of loved ones could be preserved only by personal memory, sculpture, portraits, caricatures, or silhouettes. The vast majority of people were born and died leaving no visual legacy. This quote from Henry Fitz, Sr., captures the enthusiasm that resulted from the release of the daguerreotype process by the French government as a gift to the world 19 August, 1839: “Here is a similitude of heavenly origin! Of a wonderful power! A supernatural (so far as man’s agency is concerned,) agent! An effect produced by the light of heaven; absolutely creating man’s perfect image and identity [emphasis mine].” (The Layman’s Legacy, Volume II, 1840.)

END_OF_DOCUMENT_TOKEN_TO_BE_REPLACED

A selection of unidentified daguerreotype and ambrotype portraits.

“In terms of symbolism, the loss of the soul is the same as that of the body, representing a crossing over to a place that we do not know or understand.”

This unusual mourning brooch, which dates to between 1830 and 1840, is a late example of the sepia painting technique popular up to a century earlier. Sepia miniatures in the neoclassical style, such as the one below right, were painted with dissolved human hair on ivory tablets and typically feature weeping women and willows, funeral urns, graves, and other scenes and symbols of loss.

This brooch is dedicated by reverse inscription to “M. Thayer,” but little more can be known about the deceased, as the inscription includes no dates of birth or death. Thayer was likely occupationally connected to the sea, although the image may be wholly allegorical. A ship sailing toward a distant safe haven, accompanied or guided by birds, may be read as the soul journeying toward the afterlife in the company of angelic beings.

END_OF_DOCUMENT_TOKEN_TO_BE_REPLACED

“In this portrait we see a woman probably approaching forty yet still wearing the popular stiff, busked corset, and her dress is as tightly fitted over it as if she were a teenager.”

I am fortunate to have several daguerreotypes in my early image collection that were featured in one of the two seminal books on Victorian fashion by Joan Severa, former curator of costume at the State Historical Society of Wisconsin. My Likeness Taken: Daguerreian Portraits in America, 1840-1860 was released in 2006, as the followup to 1995’s Dressed for the Photographer: Ordinary Americans and Fashion, 1840-1900. Both volumes were published by Kent State University Press.

In My Likeness Taken, Severna wrote of this image, “Few details testify so perfectly to the power of fashion influence as the persistent use of tight corseting. In this portrait we see a woman probably approaching forty yet still wearing the popular stiff, busked corset, and her dress is as tightly fitted over it as if she were a teenager. The corset makes for a rigid, upright posture.

“The sleeves are of the new, narrow shape, which became the preferred sleeve form by 1843. The collar is wide, in early forties style, and lappets have been laid under it and pinned with a brooch at the throat.

“The daycap is of the early forties shape, with a very deep brim that has been turned back so that its edge ruffle frames the face. The ribbon strings are tied closely under the chin and fall in lappets. Only in the later forties were the capstrings left open.

“The hair is done in short sausage curls at the crown, where it fits under the puffed back of the daycap.”

This image is also notable for its early date. The Daguerreotype process did not reach America until the end of the 1830s and was not viable for commercial use until exposure times could be cut down to a period that the sitters could bear.

“Americans began to experiment with the process almost immediately. Neck clamps limited the movement of subjects during a sitting. Mirrored systems to increase light and improved chemical techniques reduced exposure times to less than one minute. Although it is impossible to say who created the first daguerreotype portrait, all the claimants were Americans, and the daguerreotype acquired a particularly American identity. Even the leading daguerreotypists in London and Paris advertised ‘Pictures taken by the American process,’” notes the Cornell University website for the exhibition “Dawn’s Early Light: The First Fifty Years of American Photography.”

The solarization of the ribbons on the sitter’s daycap and collar is explained by M. Susan Barger and William Blaine White in The Daguerreotype: Nineteenth-Century Technology and Modern Science: “Blue usually occurs in daguerreotypes that have overexposed highlights. The frequent appearance in cheap daguerreotype portraits of blue shirtfronts on men gave these daguerreotypes the name ‘bluefronts.’”

I would postulate that given the 1842 date Severna assigned the image based on the sitter’s clothing, the photographer—who was plainly adept at posing and lighting his subject in an open and appealing manner—may not yet have mastered the technical processes of the art form. He may have been, in modern parlance, a “newbie.” Ω